WHAT has Trump done for YOU?

THIS IS WHAT TRUMP DID FOR THE USA

• Nov 25, 2019 Trump signed a law to make cruelty to animals a federal felony so that animal abusers face tougher consequences

• Under Trump’s leadership, in 2018 the U.S. surpassed Russia & Saudi Arabia to become the world’s largest producer of crude oil

•Trump signed the Right To Try bill May 30, 2018 that allows all terminally ill patients to try experimental treatments that are not yet approved by the FDA so that they have a fighting chance to live

• Hospitals will now be required to post their standard charges for services, which include gross charges, the negotiated rates with insurers and the discounted price a hospital is willing to accept from a patient

• VA employees are being held accountable for poor performance, with more than 4,000 VA employees removed, demoted, and suspended so far

•Trump administration will provide HIV prevention drug for free to 200,000 uninsured patients per year for 11 years

• All time record sales during 2019 holidays

•Trump signed into a law up to 12 weeks of paid parental leave for millions of federal workers, the single most expansive parental leave policy of ever in the US

• The act expanded judicial discretion in sentencing of non-violent crimes

• The First Step Act provides rehabilitative programs to inmates, helping them successfully rejoin society and not return to crime

• The poverty rate fell to a 17-year low of 11.8% under the Trump administration as a result of a jobs-rich environment

• Poverty rates for African-Americans and Hispanic-Americans have reached their lowest levels since the U.S. began collecting such data

• Consumer confidence & small business confidence at an all time high

• More than 400,000 manufacturing jobs created since his election

• Promoted Ric Grenell in Feb 2020 to Director of National Intelligence, making Ric the first EVER gay cabinet member for a President

• President Trump has ordered a halt to all U.S. taxpayer money going to international organizations that fund or perform abortions

• Made a deal with the European Union to increase U.S. energy exports to Europe

• Withdrew the U.S. from the job killing TPP deal

• Issued an executive order requiring the Secretaries of Defense, Homeland Security, and Veterans Affairs to submit a joint plan to provide veterans access to mental health treatment as they transition to civilian life

• In 2018, Trump’s DOJ dismantled an organization that was the internet’s leading source of prostitution-related advertisements resulting in sex trafficking

• Trump ordered the killing of Iranian general and head of terror group QUDS, Qassem Soleimani — Soleimani was responsible for the deaths of over 1,000 Americans including an American contractor the same week he was killed

• Signed the first Perkins CTE reauthorization since 2006, authorizing more than $1 billion for states each year to fund vocational and career education programs

• Has had over a dozen US hostages freed, including many President Obama could not get freed

• 8,764 communities across the country have been designated as Opportunity Zones

• White House Counsel of Economic Advisors found that Trump’s opportunity zones have attracted over $75 Billion in investments to underserved, predominantly minority inhabited communities and estimate it will create 500,000 jobs

• President Trump’s issued an Executive Order prohibiting the U.S. government from discriminating against Christians or punishing expressions of faith

• Secured $6 billion in new funding to fight the opioid epidemic

• NATO allies increased their defense spending because of his pressure campaign

• Reached a breakthrough agreement with the E.U. to increase U.S. exports

• Signed the TRACED Act to extend the period of time the FCC has to catch & punish those who intentionally break telemarketing restrictions. The bill requires voice service providers to develop a framework to verify calls are legitimate before they reach your phone

• The TRACED Act requires carriers to share tools & the ability to block spam callers with customers for free. It also changes the fine imposed on spam telemarketers from $1,500 to $10,000 PER CALL. Earlier this year Trump’s FCC fined one robocall guy $120 million

• In 2019 President Trump signed into law two funding packages providing nearly $19 million in new funding for Lupus specific research and education programs, as well an additional $41.7 billion in funding for the National Institutes of Health (NIH), the most Lupus funding EVER

• Trump’s new Supreme Court picks were the deciding votes on Janus case (June 27, 2018) which gives the right to public employees to refuse to pay union fees for collective bargaining so they’re no longer allowed to be forced into paying a union

• In 2018 Trump had the last living Nazi death camp guard living in the US arrested and deported by ICE, this was something Obama failed to do — he was sent to Germany to be tried for his crimes

• First President to ever speak at the March for Life

•President Trump on January 21, 2020 announced the United States will join the One Trillion Trees Initiative launched at the World Economic Forum as world leaders seek to combat climate change. This initiative aims to plant 1.2 trillion trees that can neutralize carbon emissions

• For Trillion trees initiative, Trump said "We're committed to conserving he majesty of God's creation and the natural beauty of our world,” and adding that the U.S. "will continue to show strong leadership in restoring, growing and better managing our trees and our forests.”

• In 2018 the Supreme Court conservative justices including Trump’s new judge voted to legalize Sports betting, the only dissenting votes were judges picked by Democrat Presidents

• U.S. oil production recently reached all-time high so we are less dependent on oil from the Middle East

• The U.S. is a net natural gas exporter for the first time since 1957

• Under Trump, the FDA approved more affordable generic drugs than ever before in history

• The Tax Cuts and Jobs Act signed into law by Trump doubled the maximum amount of the child tax credit available to parents and lifted the income limits so more people could claim it. It also created a new tax credit for other dependents

• In 2018, President Trump signed into law a $2.4 billion funding increase for the Child Care and Development Fund, providing a total of $8.1 billion to States to fund child care for low-income families

• In 2019 President Donald Trump signed the Autism Collaboration, Accountability, Research, Education and Support Act (CARES) into law which allocates $1.8 billion in funding over the next five years to help people with autism spectrum disorder and to help their families

• It was announced in February 2020 that after years of setbacks, President Donald Trump is on track to build more than 500 miles of a wall along the southern border by the end of the year and has secured billions in funding for it

• In January 2020 President Trump signed into law the USMCA trade deal between the US, Mexico & Canada that the Trump administration negotiated, It brings over 500,000 jobs and is expected to raise our GDP by 1.2%

• Trump has directed HHS to lower costs in Medicare Advantage, allowing those beneficiaries to create savings accounts + accelerating access to the latest medical technologies after being approved

• Withdrew the United States from the job-killing Paris Climate Accord in 2017 and that same year the U.S. still led the world by having the largest reduction in Carbon emissions

• President Trump signed a bill Jan 24, 2020 that spends $375 million over five years to help houses of worship and other nonprofits protect themselves against terror attacks

• The Trump administration reinstated and expanded the “Mexico City Policy” which is a ban on U.S. aid to foreign groups that promote or provide abortions and those who support others who do

• Feb. 2020 President Trump signed an executive order in California to re-engineer the state’s water plans, completing a campaign promise to funnel water to a thirsty agriculture industry & growing population in the south — this protects critical farming infrastructure for USA

• In August 2020 President Trump negotiated a historic peace deal, the first of it’s kind in over 25 years, between the United Arab Emirates and Israel. August, 13, 2020. He also teased they’re close to finalizing more peace deals.

• On August 8th 2020 President Trump signed an Executive Order putting a stop to all evictions, extending the freeze on student loans, extending enhanced unemployment benefits and a payroll tax holiday until 2021 which he promises to make permanent if re-elected

• In August 2020 President Trump banned TikTok and WeChat because they pose grave national security risks to the US because the apps are controlled by China. Don’t worry teens, it’s probably going to be bought by a US company and stay online WITHOUT China spying on you

• Aug. 2020 President Trump signed an EO to Improve rural health and telehealth access. The order notes that since Obamacare passed 129 rural hospitals have closed because of it. The order makes critical investments in rural health and eliminates expensive regulatory burdens

• In May 2020 President Trump signed an Executive Order easing regulatory burdens that may inhibit our economic recovery. This order has helped us to turn the economy around faster than we would have without it

• African-American unemployment is at an all time low

• Hispanic-American unemployment is at an all time low

• Asian-American unemployment is at an all time low

• Women’s unemployment rate is at a 65 year low

• Youth unemployment is at a 52 year low

• 95 percent of U.S. manufacturers are optimistic about the future— the highest ever.

• As a result of the Republican tax bill, small businesses will have the lowest top marginal tax rate in more than 80 years

• Because of a bill signed and championed by Trump, In 2020, most federal employees will see their pay increase by an average of 3.1% — the largest raise in more than 10 years!

Right before the virus came..

• The 25% lowest-paid Americans enjoyed a 4.5% income boost in November 2019, that outpaced a 2.9% gain in earnings for the country's highest-paid workers

• 2019 Trump signed 3 bills for Native people. 1 gives compensation to the Spokane tribe for loss of their land in the 1900s, 1 reauthorizes funding for Native language programs & 1 gives federal recognition to the Little Shell Tribe of Chippewa Indians.

• Dec. 20, 2019 Trump finalized the creation of Space Force as our 6th Military branch

• Violent crime has fallen every year he’s been in office

Trump made this economy great once and he’ll do it again.

• On January 31, 2020 President Trump signed an EO meant to combat human trafficking and online child exploitation, including adding a new position at the White House to focus on the issue and coordinate all government agencies to fight human trafficking + child trafficking. 1/2

The EO also expands prevention education programs, promotes housing opportunities for survivors and prioritizes the removal of child sexual abuse material from the internet. State Dept. is creating a website with resources + info on government efforts to fight trafficking

2. Allows states to import drugs from other countries

3. Lowers prices for patients by eliminating kickbacks to middlemen between drug manufacturers & pharmacy benefit managers. The order mandates patients receive those discounts instead

4. Ensures US pays the lowest price drug co’s charge other nations, a HUGE savings to Americans!

That’s the list. Next time a Democrat tells you they don’t know one good thing Trump has done, you’ll know they’re either uninformed or lying. He’s been a great President on policy. Some may dislike his personality but on policy he’s been an incredible POTUS. 4 more years! 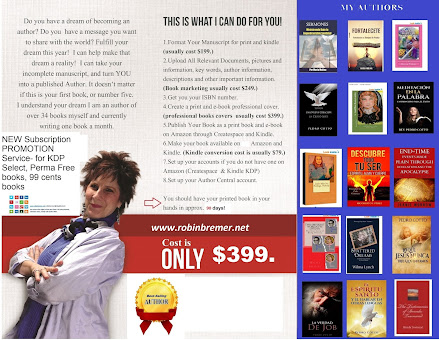 Important Tips you Should Know BEFORE you Publish Today is a treasure of tips on many hints that add up to making your book successful on ...

Sow Into This Ministry

Kingdom Keys with Robin Bremer
Best Selling Author Robin Bremer is an Ordained Minister and Publishing Coach. She has appeared on national TV and radio. She believes that the supernatural should be normal for every Christian. Her Facebook Live videos teaches on the supernatural kingdom of God. Her focus is on becoming mature sons of God. To learn more about Robin’s Christian Publishing go to: http://www.robinbremer.net to view her videos go to: https://www.facebook.com/ AuthorRobinBremer/videos_by